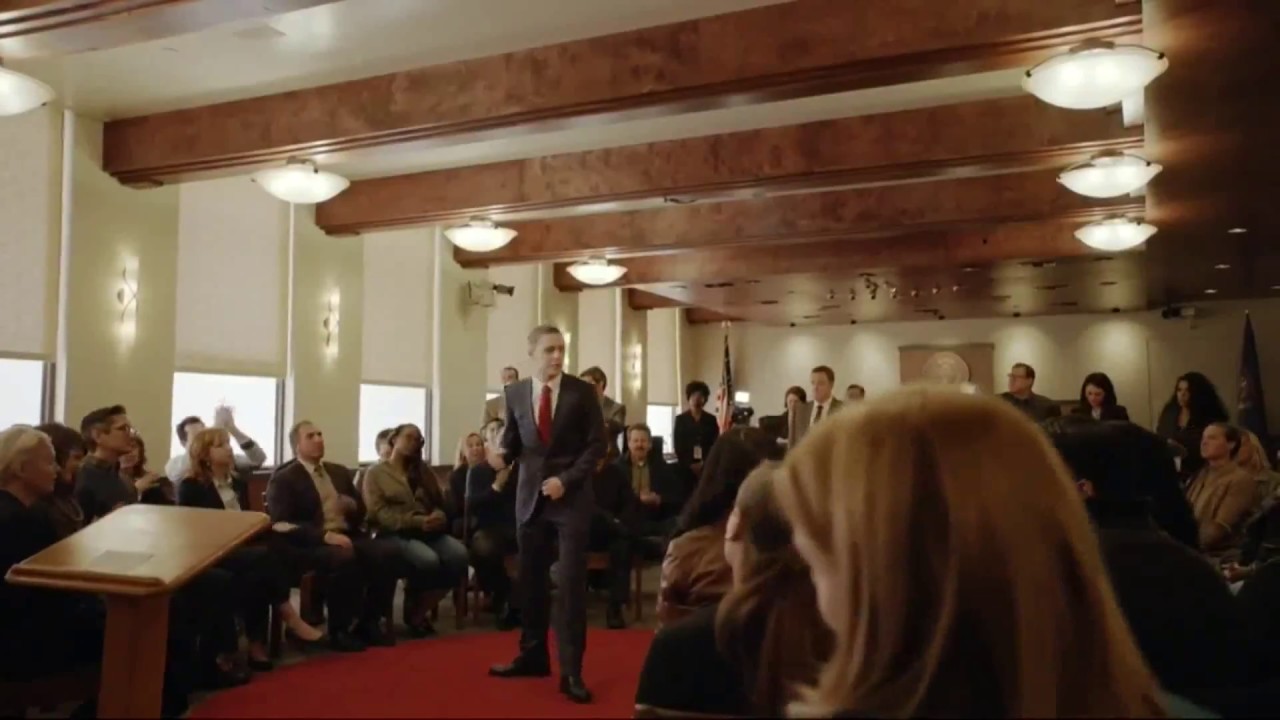 This week’s episode of American Horror Story: Cult was a topic of conversation before it even aired. In the wake of the Las Vegas shooting, a flurry of minor news about FX’s decisions regarding AHS’s next episode, which features a mass shooting, popped up. It’s a bit more chilling than the series itself — the fact that mass shootings are such a common occurrence that any time a film or television show wants to address the topic, it almost inevitably ends up getting edited, pushed, or cancelled in deference to an actual mass shooting. The weird thing about this — to me, anyway — is that although they edited the shooting sequence which bookends this episode for the live airing… they left it in tact online. And since, like… everybody and their mother watches shows online after the fact now, this sort of seems like an empty effort. But whatever.

The opening scene is a shooting at a rally Kai is hosting — he’s shot, and we see him laying unconscious on the stage. The rest of the main characters seem to be safe, but there’s definitely some carnage. (If you’re feeling understandably sensitive following Las Vegas, or about mass shootings in general — again, understandably — I don’t recommend watching any of this.) When the police arrive, we see them surrounding Ally and telling her to drop the gun. But we know it wasn’t actually her doing the shooting because the close-up of hands on a trigger that happens at the beginning of the sequence shows fake, manicured nails, and Ally’s aren’t.

We double back to Ally, hearing Meadow revealing to her the truth of what’s been happening. Instead of following Kai and his ilk like last week, we follow Ally. She rescues Meadow and takes her in, and Meadow spills the beans about everything they’ve been doing. Finally feeling vindicated because she’s not crazy, Ally suddenly locates some sort of drive and motivation. She takes Meadow to her psychiatrist’s house (which, as we know, is probably a bad move since the psychiatrist seems to be Kai and Winter’s brother… but either he doesn’t know what’s going on, or this’ll come up in another circuitous flashback later) for safe keeping and goes to get help. 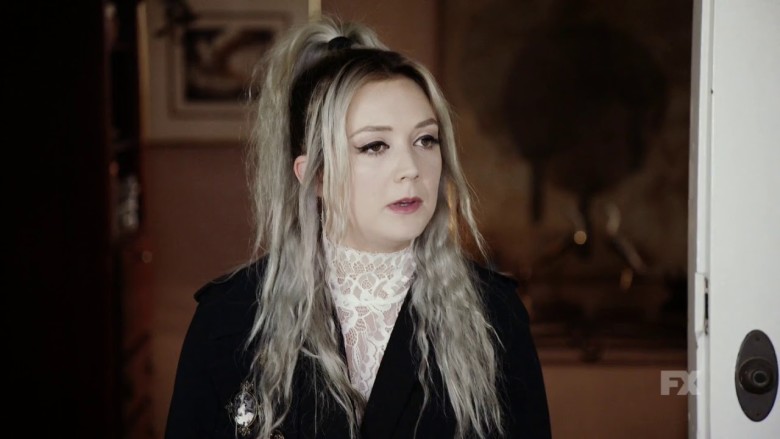 As we’re following Ally on her new mission to save the world, we’re also getting flashbacks around Ivy and Meadow. It’s revealed that Ivy’s motivation for teaming up with Kai and torturing Ally is that Ivy actually hates her wife. She felt that Ally viewed Oz as he son rather than theirs because she gave birth to her, and over time resentment built up and boiled over when Ally voted for Jill Stein. Ivy is staying in the marriage for Oz alone, knowing that if they divorced, she wouldn’t get custody over his biological mother. Kai suggests to her there might be another way to escape Ally and keep her kid — making Ally seem so crazy that no judge would give her parental rights. I have some questions about somebody as politically and social justice-y savvy as Ivy appears to be hopping on board with making a woman seem crazy and unstable since that’s a… pretty political and historically sexist thing to do — this is once again where American Horror Story lacks a lot of nuance for me and ends up disappointing — but at least we now sort of understand what’s going on there.

Meadow’s journey was basically that she felt betrayed by the feminist party line of you can have it all, and Kai made her feel worthwhile and wanted. Again, I get this, this makes sense, and I’m sure most women, myself included, can relate to that feeling on some level at some point. But like Ivy making Ally appear publicly insane, there are some deeper things here that I really want dug up and don’t get the attention that I think they deserve — like the fact that regardless of how interesting that journey is, Meadow’s solution is still some guy who makes it all better. But Kai’s comfort and companionship, as ever, comes with a price, which we’ll get back to.

Ally goes to the house of Susan, a woman who decided to run a write-in campaign in opposition to Kai. She’s a tough liberal from Berkley, who immediately believes Ally’s story — she points out all a bunch of the major cult leaders in history formed in opposition to some kind of women’s rights or empowerment movement, and says that it makes sense. Which, y’know, it does. It’s great to see Ally finally believed. Unfortunately, Susan has already made herself Kai’s enemy by standing up to him publicly, and so he and the clowns show up. Ally runs and hides, but Susan doesn’t escape. Kai writes a fake suicide note and posts it to Facebook, saying that Susan lost hope for the future of the country and gave up, and kills her. Ally runs back to the psychiatrist’s house to find that Meadow has already left. He says that she didn’t say anything about a cult.

And then we’re back to Meadow, who has been in collusion with Kai this whole time. I honestly groaned out loud at this realization. It’s patently ridiculous that Kai is so ahead of everything all the time, and it’s boring when it seems like we’ve been presented with a perfect, flawless, strangely omnipotent villain without a similarly adept protagonist to answer him. But anyway, Kai’s price for giving the Meadow the love and validation she craved is that Meadow needs to attempt to assassinate him so that he can become national news. And then she needs to kill herself, so she doesn’t fold under police questioning. 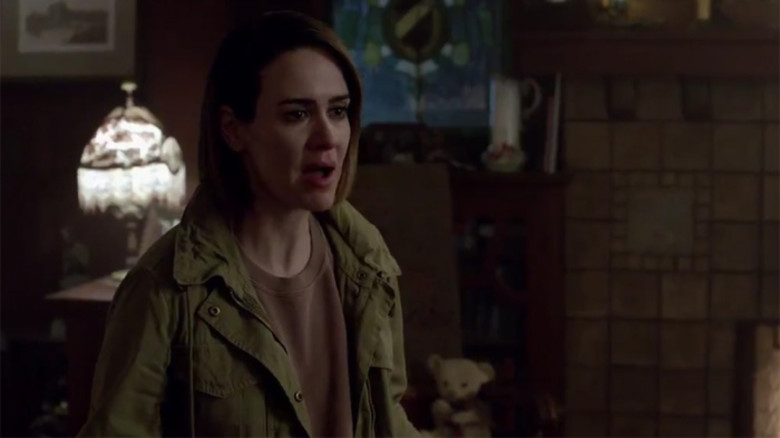 So we bookend the episode on the shooting yet again, only this time we see Meadow perpetrating it. Right before she kills herself, she tells Ally something about being the face of true love, and Ally’s left holding the gun as the police arrive.

I have literally so many questions for the show runners of American Horror Story: Cult. To say that the results of this past presidential election weren’t very much about misogyny would be at best ignorant, and at worst willfully so. So to center a show around the horrors of that election, and that experience, around making a woman seem clinically insane and another woman who kills herself as an act of devotion to the man who gave her sad, previously “feminist” existence meaning feels very tone deaf. There’s obviously a lot more going on in this show, and I clearly have a bias in what I pay attention to, but I’m just not sure what the point AHS is trying to make is. Yes, we know that our political systems are in chaos. Yes, loud, angry white male voices always seem to find a platform and an audience even if they’re completely insane. Violence begets violence, and all of those other 8th grade book report themes hold true — but this whole season just feels like a wasted opportunity to do something worthwhile.