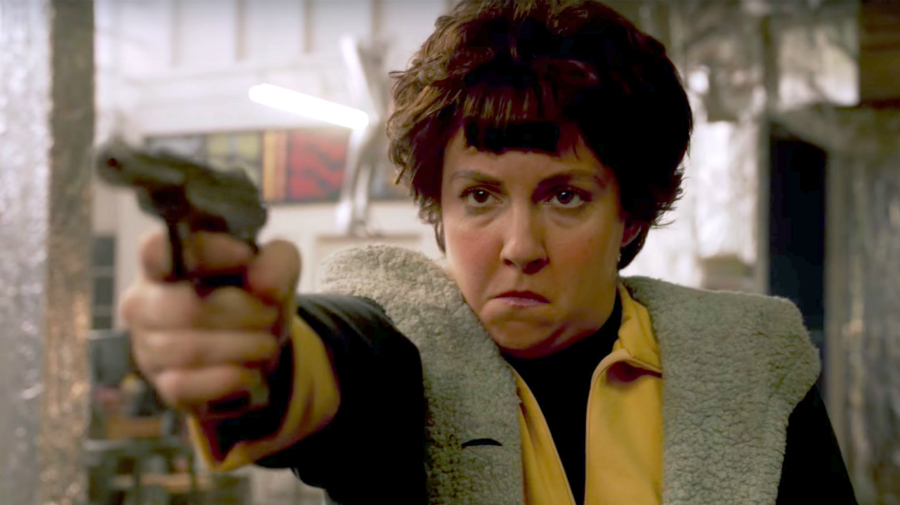 This week we dive real deep into the cult aspect of American Horror Story: Cult. It finally makes the season make a little more sense to me, especially if we’re doing this more — I kept feeling really confused as to why “cult” was the strongest title to go with when, yes, we’re dealing with a cult, but could’ve come up with something a little more pertinent to the election. This week, we open on Valerie Solanas, an angry separatist feminist who’s betrayed by Andy Warhol after he agrees to produce her script, and then loses it. He tells her that women can’t be serious artists and tries to dismiss her.

She returns the next day and shoots him — which actually happened, and Warhol did survive, but it was a serious injury that impacted him for the rest of his life. After this interlude, we return to the usual timeline. Police have identified Meadow as the shooter, which is nice because it means we don’t have to deal with some silly, unbelievable plot line where Ally is framed for the deed. They say five were killed in the shooting, but obviously Kai survived, and of course, given that he murdered the opposition, won the election.

As Kai digs into his new role and national notoriety, Beverly is approached by Bebe, a creepy hooded woman (honestly, the scariest part of the show to date) who arrives to show the women the way. We see each of the women slowly being iced out of Kai’s inner circle in different ways. Beverly confronts him after feeling like he got his national notoriety, but after promising her an equal partnership, she has nothing. Ivy has always sort of been on the outs. Winter, though more on the inner circle than anybody in theory, has always been politically at odds with Kai and ripe for the turning. Meadow’s now dead. That leaves the main cult to be just Kai, Harrison, and the neckbeard guy.

So Bebe has her work cut out for her as she tells the women of Valerie Solanas, her girlfriend, who wrote the SCUM Manifesto. SCUM stands for “Society for Cutting Up Men.” Through this manifesto, Valerie built a cult around her in which Bebe was a willing and enthusiastic participant. Valerie’s attempted murder of Andy Warhol was actually a signal to her acolytes to begin their real work: murdering couples to show women that pairing off with men would only get them killed. So, um, this is how we learn that the Zodiac Killer was not, in fact, Ted Cruz — it was SCUM. The timelines on this in the real world don’t quite add up, but y’know. Whatever. Valerie masterminds these murders from a psychiatric hospital where she’s being held after shooting Warhol. But then there’s a new problem.

The Zodiac Killer starts writing to the papers, taking credit for the murders Valerie and SCUM actually committed. Enraged that a man is taking credit for women’s work yet again, Valerie confronts her group once she gets out of the hospital. Though they are a separatist feminist cult, there are two men who made the cut after utterly renouncing themselves as men. Of course, it’s one of them who’s been posing as the Zodiac Killer. Valerie and her crew kill him and make him their next victim. Historically not all of this quite lines up, so it’s unclear if this is just AHS playing fast and loose with the facts or if it’s intentional because within the show it’s a fabricated story.

Either way, the women are on board. They’ve got a lot of anger at the world, and at Kai, and at how their radical group has become definitively reactionary, and increasingly looks like a white nationalist rally.

Winter goes home and has a tense conversation with Kai over their parents’ bodies (so, the story of his parents is real after all). Kai brings out a copy of the SCUM manifesto, saying he found it in Winter’s room, and says he’s thinking of writing his own manifesto. He’s been kicking around a couple of acronyms, including FIT which stand for Fear is Truth, but the kicker is MLWB — Men Lead, Women Bleed. Kai says that it was Harrison’s suggestion. It’s a little unclear as to whether or not Kai is intentionally baiting Winter and knows what’s up or not until Winter goes to leave, and Kai tells her to say hi to the girls for him.

After this tip-off about Harrison’s whole MLWB thing, the women call him to the Butchery and, well, butcher him. Obviously, Beverly gets the scoop on the dismembered body found in the lake. Her coverage of the murder comes across as more of a threat to Kai, which was perhaps my favorite moment of the show to date — watching the women finally fight back against Kai and his nonsense, and team up, is super satisfying and exciting to me, because I just don’t have any interest in this omniscient puppet master who has nobody to actually challenge him.

But of course, my excitement was short-lived. We see Kai watching Beverly’s coverage, and when it’s over, he makes a comment to somebody else in the room that “they’re at their best when they’re angry.” We pan over to find Bebe sitting watching TV with him, agreeing.

Like Ally finally getting let in on the secret by Meadow, we once again put somebody in the position to raise the stakes and make this chess game two-sided, only to snatch it away at the end of the episode with the “twist” that Kai has been orchestrating the whole thing all along. At this point, it’s not interesting or impressive, it’s boring. My excitement about the women coming together was tempered the whole episode by thinking “he’s going to be behind this again” and surprise surprise, he was. His agenda at this point is a little unclear. It doesn’t seem like any agenda would be served by alienating his entire support system, but every time I have a question I have to just let it go, because at this point it seems safe to assume Kai will answer it eventually. Yawn.