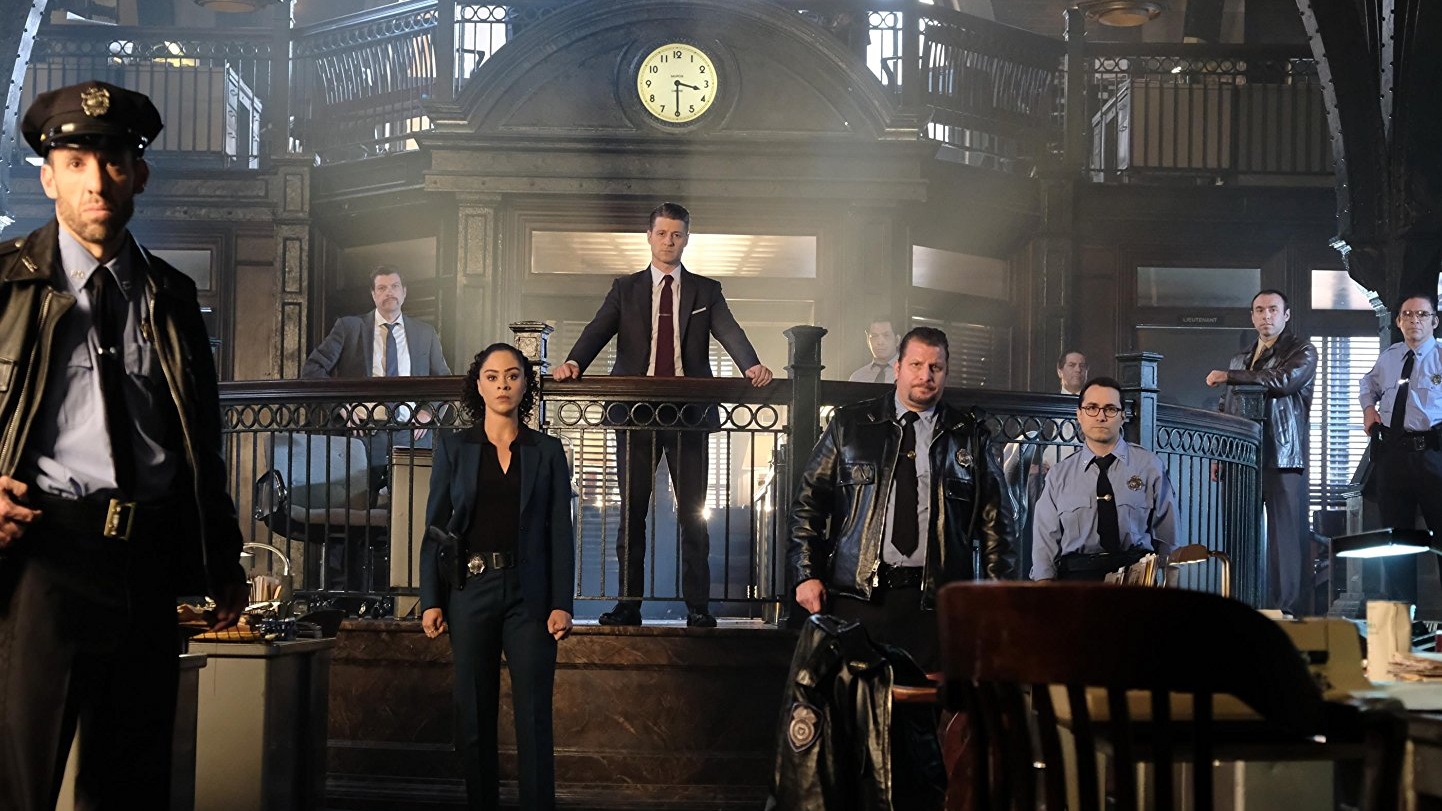 Gordon puts a huge dent in the Gotham underworld, but the blowback might be more than he can handle when “Queen Takes Knight.” This episode carries season four into winter break with a series of interesting developments, reversals, and losses. We start with Sofia leading The Sirens in an attack against Penguin’s headquarters, but they only catch Mr. Penn and he doesn’t know where the boss is hiding. Sofia gets a call from Carmine to meet him at their old estate.

The Sirens go with her but it’s an awkward scene. Carmine is not happy with his little girl’s progress in Gotham and he hates the fact she was sleeping with Gordon. He tells her to pack and leave with him back to the South. Sofia says she only needs a little more help to wipe out Penguin, Carmine is the extra push she needs. Then, Penguin and Zsasz step out of the shadows. Penguin called Carmine and made a deal to get Sofia out of Gotham safely. Of course, she sees this as a huge betrayal. 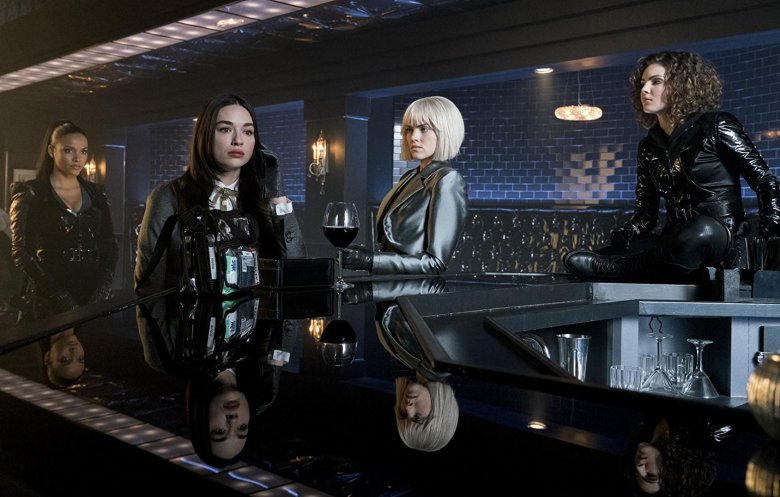 Gordon thinks Pyg is hiding with a different face and he’s afraid Penguin is going to kill Sofia. He arrives to warn her just as she’s getting ready to leave with Carmine. She stops to pick a flower and Carmine gloats about how happy he is to see Gordon alive, he has a tsunami of trouble headed his way. Then, a van drives by, a machine gun opens fire, Sofia gets hit, but Carmine gets killed. Sofia, Zsasz, and others think Penguin ordered the hit.

Gordon attends to Carmine’s funeral, Bullock is also there and lists all the blood Gordon has on his hands. He suggests since Gordon hasn’t been able to make any old charges stick, to catch Penguin at something he can build a successful case against. Zsasz pays his respects at the funeral, then abandons Penguin on his way out. Gordon wheels Sofia out under his protection and tells her he’s ready to finish what he started.

Penguin waddles into Gotham Central like he owns the place. He demands Gordon turn over Sofia, but he won’t. He offers a bounty to any cop that helps him, but they won’t either. They drag him out onto the street. Gordon gives the GCPD a speech about this being the force Gotham needs to secure the city. He tells them to suit up and they go to war against Penguin’s criminal operations. 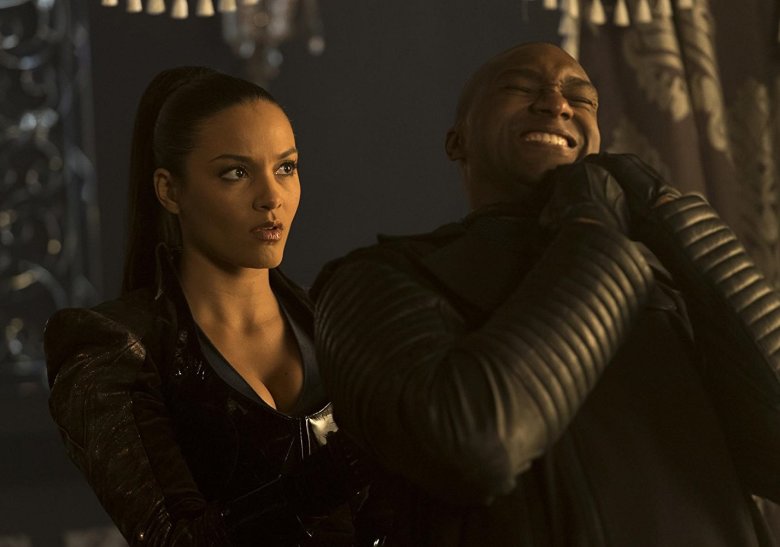 Meanwhile, Alfred spends his days dragging Bruce out of destroyed hotel rooms or cleaning up his messes in the cars. Alfred plans a big European vacation to take Bruce away from all his local club naughtiness but Bruce fights him over going. It’s a fist fight, Alfred wins. Bruce has the family lawyer emancipate him, then fires Alfred. It sounds pretty bad and it is hurtful, but Bruce has earned his bad boy, bad decision time. I wonder where Alfred will go?

Gordon and GCPD take down many Penguin hot spots, one of them was holding The Sirens hostage. Sofia rewards their alliance by returning their club. Barbara is happy, but Tabitha walks off. She’s on a mission to get her man back. Tabitha finds Grundy and gasses him out. He wakes but he doesn’t remember her. Tabitha does her best to remind him what they meant together. It’s very sweet, but none of it helps. She tries beating the memory into him, but that doesn’t seem to help either. Eventually, she walks off leaving him in a chair. Then, he sees his reflection in a puddle and some of his memory of Butch returns, but she’s gone. I hope these to get together again, they made one of the healthier couples in Gotham. 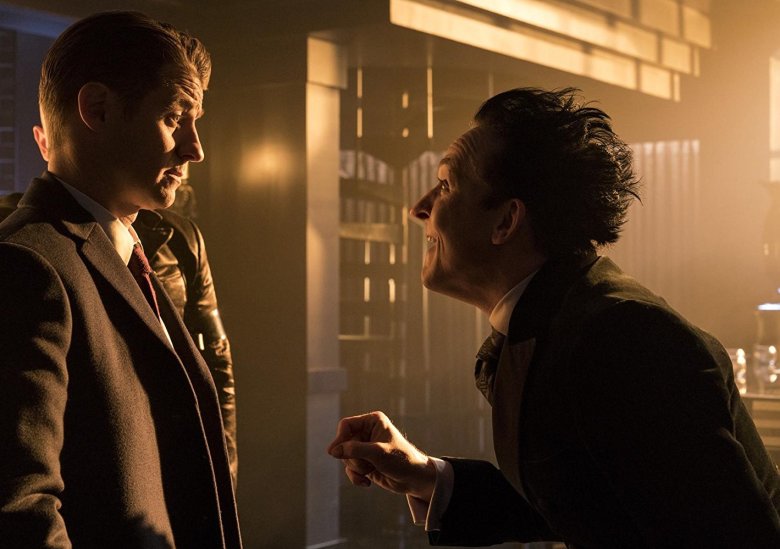 Gordon isn’t any closer to finding Penguin but Sofia has an idea. She confesses she witnessed Penguin blow up young Martin. This case shows promise. This time, he finds Penguin, with Zsasz, and explains he’s arresting him for the murder of Martin. Penguin laughs and says he never killed Martin, Zsasz knows where the boy is hidden, but Zsasz betrays Penguin. He tells Gordon he’s willing to testify that Penguin murdered the boy. I never saw this Zsasz twist coming, he made some sort of deal Sofia because she’s an actual Falcone. Penguin goes to jail and everyone applauds. Bullock, turns in his badge and gun. This is by far the biggest downer of the night, I hope this doesn’t mean we won’t be seeing Donal Logue anymore.

Gordon visits Sofia to tell her Penguin is safely behind bars. She reveals she’s been working with Pyg from the beginning and set up Carmine to be murdered in the drive-by. Pyg shows himself to rub Gordon’s face in his trick, but Sofia kills him. She tells Gordon she needs him running GCPD while she organizes the criminal element. Then she calls the police, and Gordon accepts credit for killing Pyg. Everyone thinks he’s a hero, by any measure, he is. The last great bit happens while Penguin screams from his cell. His neighbor offers friendship, Jerome Valeska is only one wall to the left. That’s exciting. They leave for break with incredible momentum and the promise of sinister villainy to come.