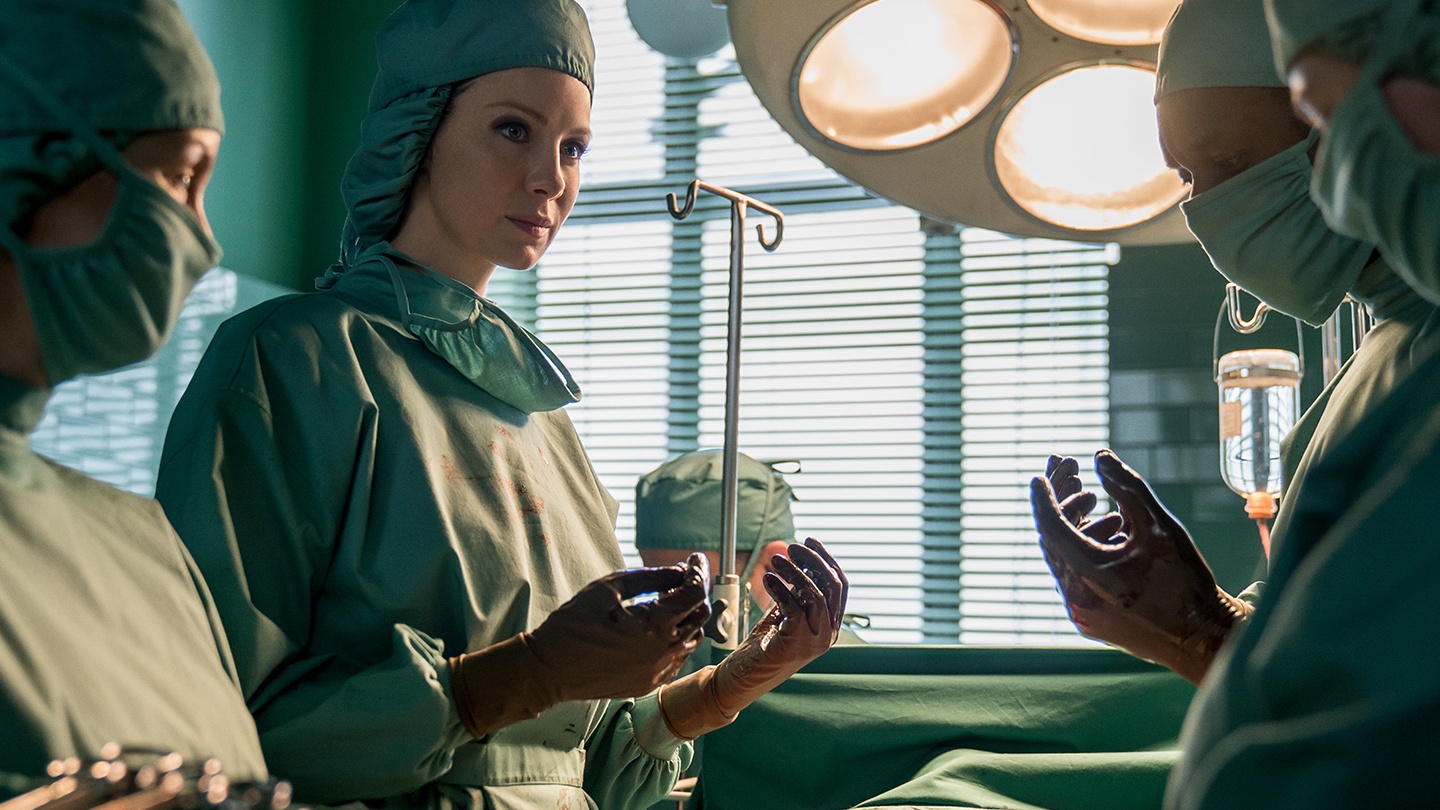 Claire has spent twenty years of her life separated from the man she loves most deeply, and in this time she’s both chased after Jamie’s ghost, and resigned herself to the fact she may never see him again.  In Boston, she not only has a career, but also her daughter Brianna.  It’s a place where she’s built a new life for herself, and walking away from this life for the hopes or chances of another seems like to much of a long shot for her.  When she left Scotland with Brianna, she made the tough decision to close that book of her life. 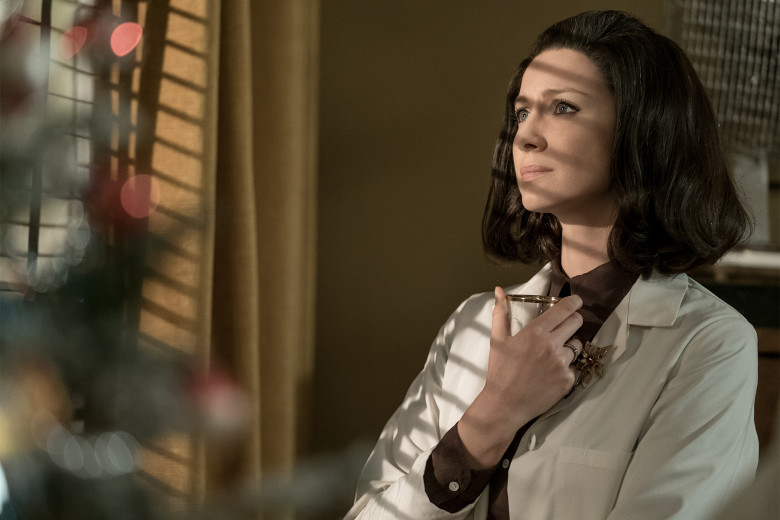 Now that Brianna has learned the truth about who her real father is, life isn’t so easy for her anymore.  She excelled in Harvard before her summer trip to Scotland with Claire, and now that she’s back with the knowledge of Jamie and Claire’s past, she can’t seem to perform in school like she did before.  Brianna is on the verge of failing out of Harvard.  One of her professors points out how fictional prose can alter the perception of history while describing Paul Revere, and with her own past rewritten before her very eyes, Brianna has decided history cannot be trusted to be true.  She’s found out her entire life was built on the lie that Frank was her father, she tried to help Claire track down Jamie all summer while they were in Scotland, and now that she’s back she needs a break from everything to decide who she is, and what she wants out of life.

Roger arrives in Boston as a surprise to both Claire and Brianna.  He came for many reasons, the first of which is it would be his first Christmas alone without the Reverend, and he wanted to spend an American Christmas with Claire and Brianna.  Another reason he took the journey all the way across the ocean is because he’s in love with Brianna.  It’s a daring and romantic gesture that feels like it backfired when he knocks on their door only to find Claire and Brianna in the middle of a massive argument.  The biggest reason he came unannounced, is because he found evidence of Jamie that he wanted to share with Claire.  Being a historian, he doggedly pursued finding out what happened to Jamie, and after a long search finally found something big. 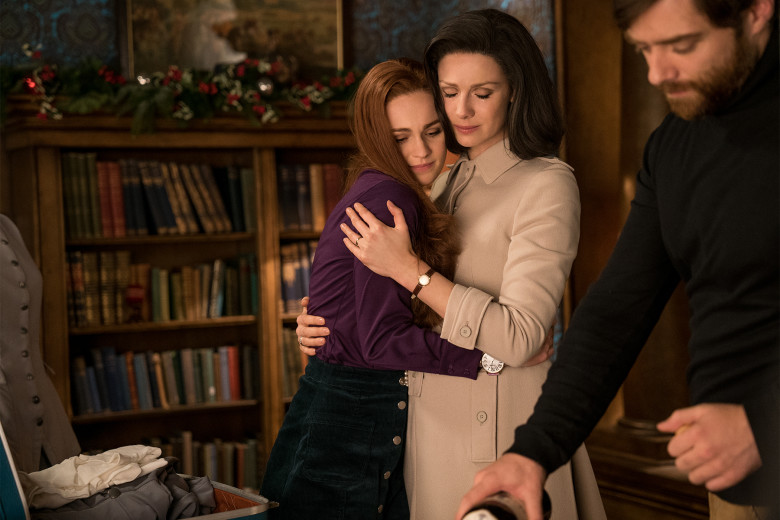 The evidence is a printed treatise by an author named Alexander Malcolm from Edinburgh in 1765.  Alexander Malcolm is Jamie’s middle names, which would be a hell of a coincidence.  The other reason Roger believes Jamie is the author, is because Claire told Roger she used to quote a John Dunne poem to Jamie, and he in turn quotes the poem in the article Roger found.  Claire thinks everyone would know John Dunne at the time, dismissing the find, but Roger tells her in 1765 Dunne was only six years old.  Only someone with knowledge of the future could quote lines that hadn’t been written yet.

Claire is excited at first, I mean who wouldn’t be.  The opportunity to track down the love of your life after twenty years is amazing, but her doubts and fears begin to creep in.  The safety of her Boston life compared to the risk of failure at finding Jamie again in the past makes her scared.  She’d already decided to give up, to stop looking for Jamie.  If she continues to live in the past, she will never enjoy the life before her, which is why she’s angry with Roger for bringing hope back in her life.  It’s not the reaction he was expecting given that it’s almost certain Jamie is the printer and author of the treatise.  Claire makes Roger promise not to breathe a word of it to Brianna, and he agrees.

There’s a powerful scene in the middle of this episode where Claire comes face to face with Frank’s mistress Cindy at a dedication ceremony to a research grant in Frank’s honor.  Cindy pulls no punches with Claire, and tells her she’s selfish for never letting Frank go during those twenty years.  Frank was the love of Cindy’s life, and she could have made him happy.  She tells Claire, “You lived a lie and made Frank and Brianna live it too.”Brianna witnesses the entire exchange, and the truth about both her father’s mistress and Roger’s proof of Jamie’s existence come up in her conversation.  Claire lays all of her cards on the table for Brianna to see, hoping there will be nothing but truth between the two of them.

Brianna wants her mother to be happy, and thinks Claire should pursue finding Jamie, despite her fears he may have forgotten her, or perhaps doesn’t love her any more.  It’s been twenty years since they’ve been together, and she worries she’s not attractive anymore, or perhaps Jamie’s moved on.  Brianna and her friend Joe, both tell her what she needs to hear to be confidant enough to take the trip back in time once again, though Joe doesn’t know the real reason.  Brianna also tells her, “You gave Jamie up for me, now I have to give him back to you.”  During their Christmas celebration, Brianna and Roger give Claire gifts she can use in the past.  There’s also a wonderful montage of Claire designing and sewing her own clothes so she’ll fit in with the styles of the past once she goes back.

Their parting is an emotional one, since Brianna and Claire aren’t sure they will ever see each other again.  Claire has made arrangements for everything to be in Brianna’s name, and decides to go to Scotland on her own.  If Brianna came with, there’s a good chance Claire would change her mind at the last second.  The way Claire travels back into the past is done perfectly.  We aren’t shown how it happens at all.  As she steps out of a taxi in the 1960’s, she’s suddenly stepping into the past, already there.  Her path to Jamie’s door is slow and thoughtful, she’s excited, yet nervous, but cannot wait to see Jamie again.  Once she sets foot in his printing shop, it seems as if she has trouble speaking, but once she does he turns around and sees her for the first time in twenty years.  A look of wonder, excitement, and confusion plays across his face before he promptly faints, and the episode cuts to black. 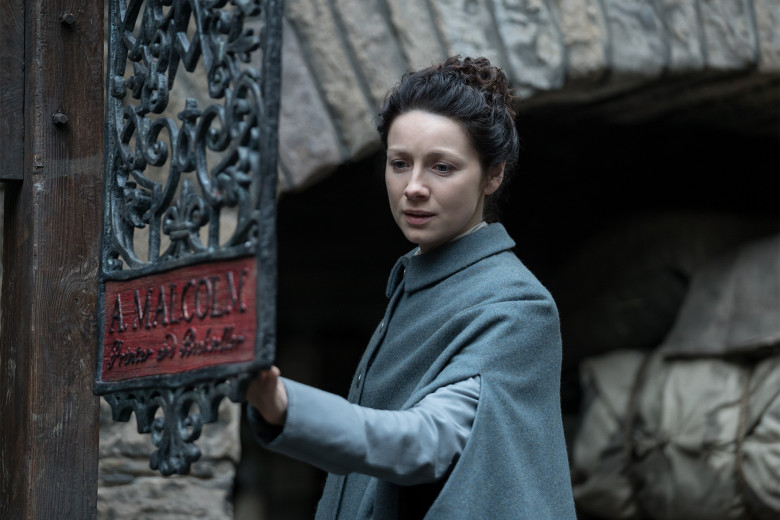 Having Claire and Jamie finally together again is wonderful after being apart.  Clearly their reacquaintance will be joyful, but short lived, since every time these two get together history gets in the way somehow.  What will intervene in their lives this time to threaten their happiness?