This entire season of Outlander has felt stalled out, unsure of itself, and unable to tell a compelling story until just recently. With only three episodes left, there’s a lot of work that needs to be done to redeem this season. The only question is whether there are enough twists and turns to make the previous nine episode slog worthwhile.

Most of the focus of this episode is on Brianna’s continued guilt that she didn’t do enough to keep Bonnet from raping her. Her remorse is intense, and she beats herself up thinking she could have fought him off. It takes some tough love (and an excruciating moment between Brianna and Jamie) for her to realize if she had fought more, Bonnet may have killed her. It’s a rough lesson Jamie teaches her, and the words he chooses to use to anger her made my skin crawl.   I know he was just trying to prove a point, but there are moments where things said and not meant, are not so easily forgotten, and this is one of those times. The combination of the typical “maybe you liked it” goading of Brianna, paired with the violent way he puts her in a choke hold to show her she wouldn’t be strong enough to fight her way free makes her understand, but it’s still a harsh moment between a father trying to win his daughter’s affection, and a daughter unsure of her relationship with the man who sired her. She turns the table on this moment by bringing up Jamie’s raping at the hands of Black Jack, wondering aloud if killing the man who raped her would give her closure. Jamie is taken off guard by her knowledge of this, but tells her it does not mend the pain of being raped; only time can take the edge off of that. 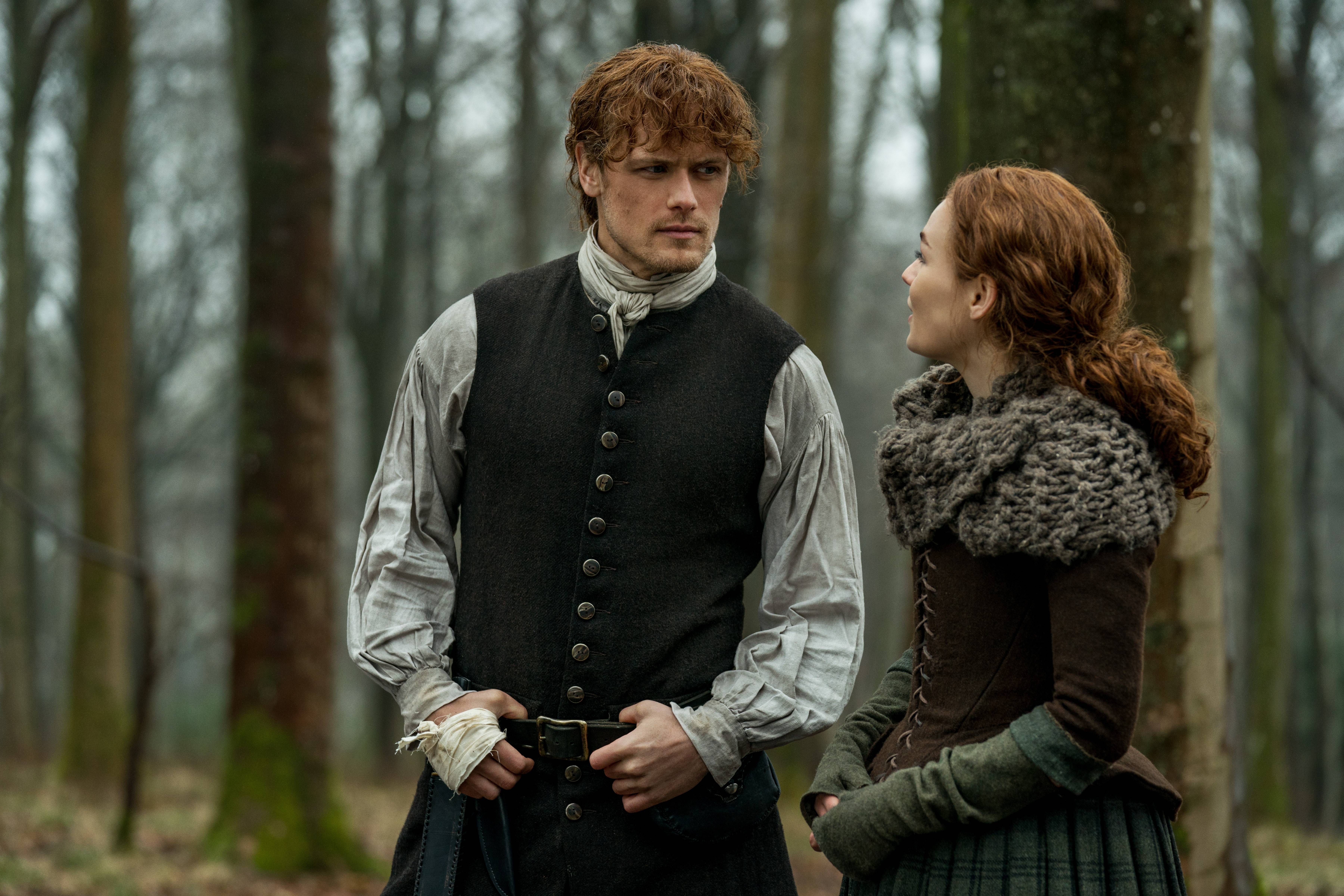 This moment combined with the revelation Jamie mistakenly beat Roger half to death because he thought Roger was Brianna’s rapist, and Young Ian sold him to the Mohawk Indians in exchange for some jewelry, should seal their relationship’s fate. It appears to do just that, straining things between Brianna and Jamie, and also putting a lot of tension on Claire and Jamie’s relationship. This is the moment Brianna gets to let out all of her pent up rage and anger, and she doesn’t hold back. She strikes both Jamie and Young Ian, and demands they track the Mohawk group that bought Roger and bring him back to her since he might (?) be the father of her unborn child. Her anger is only matched by Jamie’s shame. He’s made a terrible mistake and he knows there may be no winning his daughter back.

Sophie Skelton digs deep in this scene, and her admonishment of Jamie is one of the first moments she’s felt believable. Most of the time her delivery of lines is wooden and flat, but she lets loose here telling Jamie he does not get to be more angry than she is. The tiptoeing around their relationship is over, and she takes charge of the situation demanding a drastic change to all of their lives until Roger is either brought back or found to be dead. This means the near abandonment of Claire and Jamie’s home and crops. While Brianna goes to live with Aunt Jocasta, Claire, Jamie, and Young Ian will track down Roger. Does this mean no one will be home at the cabin when the fire takes place? 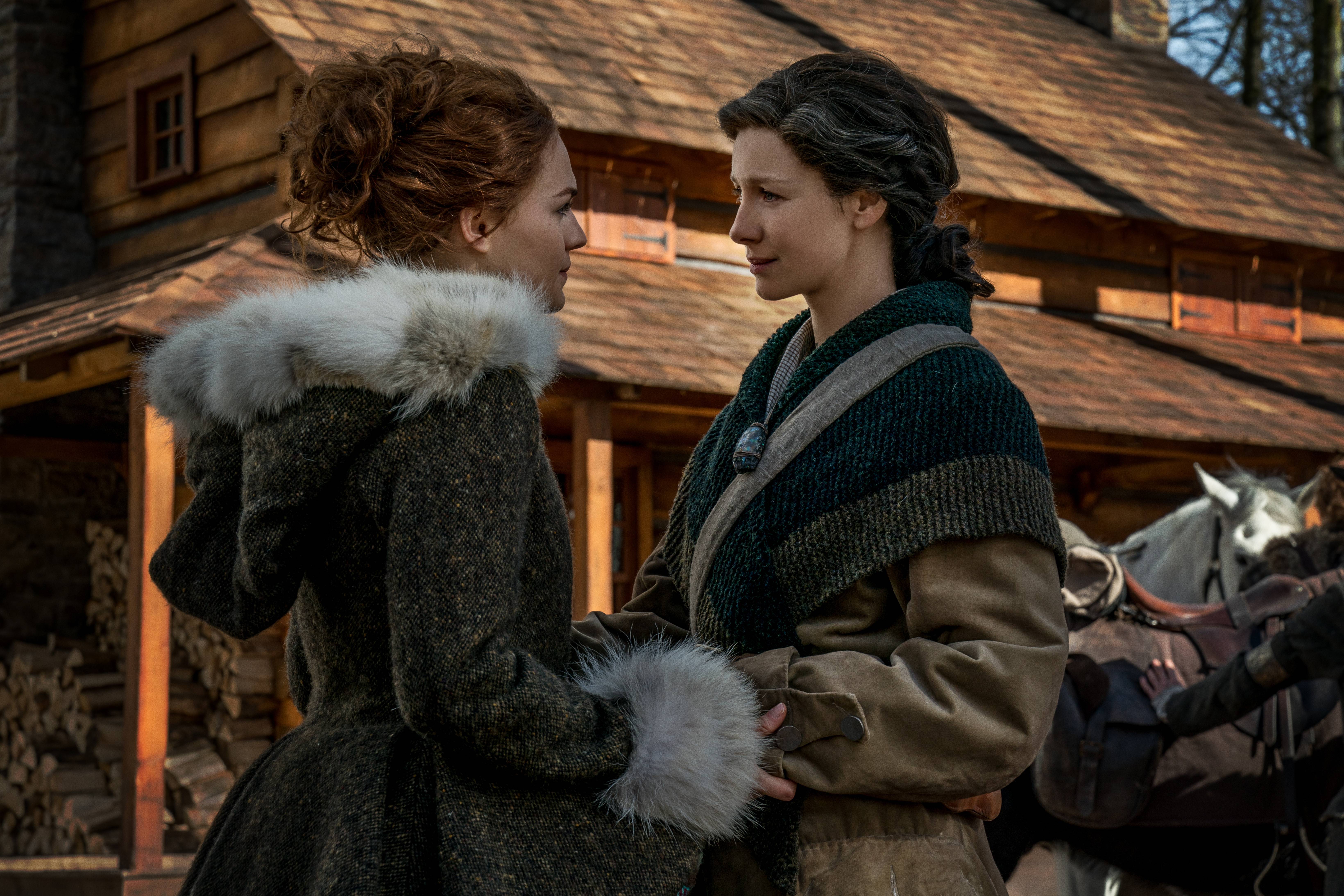 Roger’s plight is a dire one. He’s bound and tied behind the horses of the Mohawks and forced to walk all day long. He’s not the only person being held prisoner by this group, and he helps another man walk so the Indians will not beat him. Roger has a piece of string he keeps track of the days on, and has figured out how far they walk every day (10 miles), what direction they travel, and any landmarks they pass so he can find his way back to Brianna eventually. Soon he’s the only captive left alive, and a moment arises for him to escape as he stumbles down a steep hill still tied by the hands to a horse. This escape and chase scene is probably the most exciting thing that’s happened all season on Outlander, and it leads Roger to the North Carolina standing stone. He almost finds it by accident. It’s a sound that draws him near. The sound fills the air, and he immediately recognizes it as the same sound he heard when he passed through the stones at Craigh Na Dun. The revelation of a gateway to another time, especially after such a harrowing escape, is a draw so powerful that it appears he gives up on the dream of being reunited with Brianna again. As his hand reaches toward the stone there’s a look on his face of uncertainty and doubt, and the scene cuts to black before we can figure out Roger’s intentions. It’s a powerful ending to the episode, but it begs the question of whether this stone will return Roger to his proper time period, or if it will send him to an entirely different date? Can only Craigh Na Dun can send him back to his own time period. 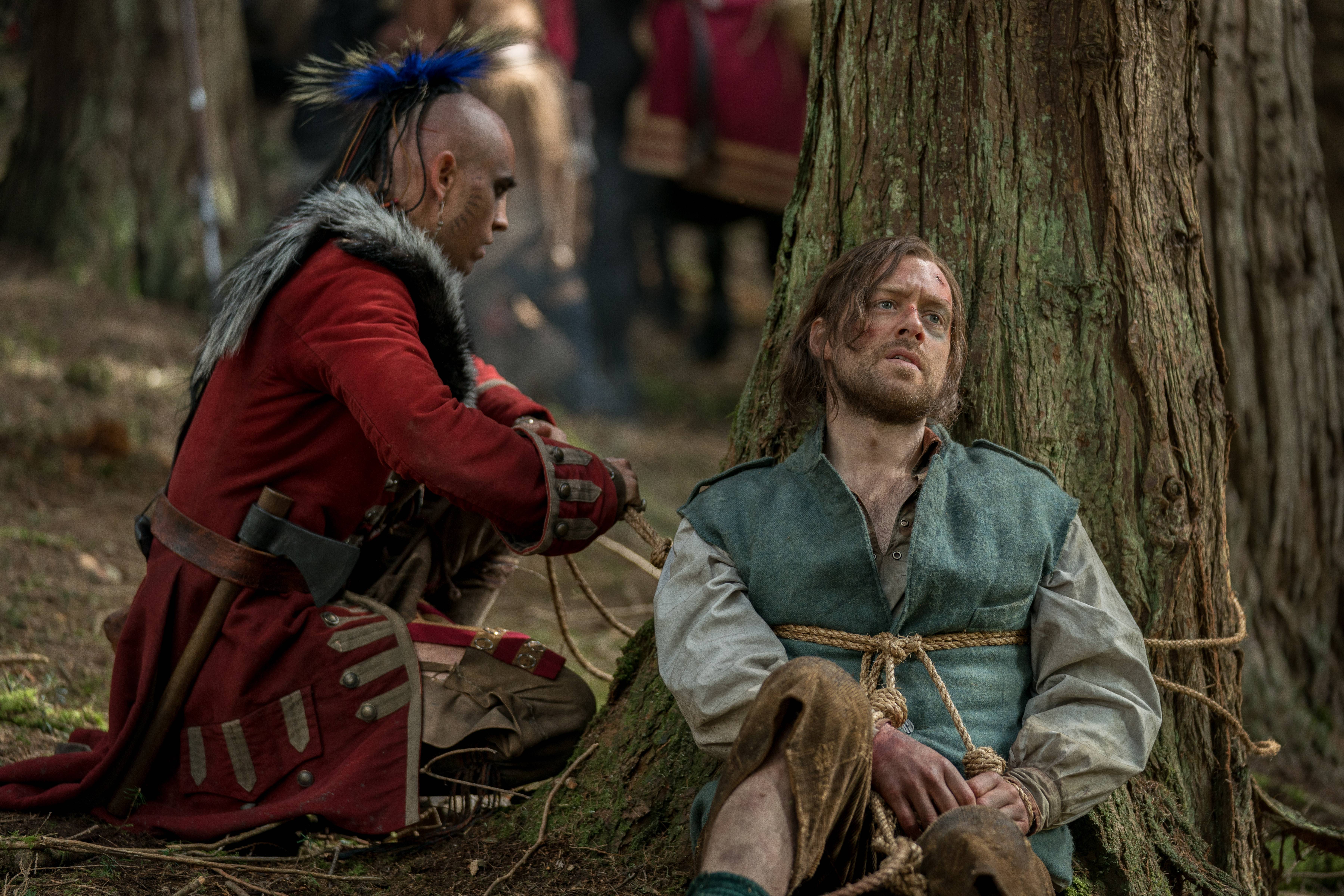 Brianna’s decision to keep her baby even though it’s most likely Bonnet’s seems counter intuitive given that Claire can help Brianna get rid of the child. I found this moment to be a bit of a stretch. I don’t understand how Claire allows Brianna to believe that even though Roger used the pull out method when they had sex, and Bonnet finished inside of her, that there’s any realistic chance the baby could be Roger’s. I have a hard time believing anyone would think this way, and given that the baby could be Bonnet’s, it seems more likely she’d want to get rid of it. Claire finally tells Jamie that Bonnet was the rapist, and Jamie puts into motion a plan to have Murtagh capture Bonnet and bring him to Jamie so he can kill the man. He keeps this plan from everyone, but how will Claire and Brianna feel if they find out what he’s up to? Given Roger’s escape from the Mohawk, the rescue operation will likely run into trouble, leaving just three episodes for Outlander to untangle every obstacle they’ve constructed to keep Brianna and Roger apart.