Tweetable Takeaway: The Caskett love was clearly present, but their suspect was definitely not in this week’s episode of “Castle.”
Tweet

Setting a different tone: this week’s episode of CASTLE was a lot lighter and much more humorous than the first two episodes of the seasons had been, and I for one loved it. It felt like coming home for the first time after being away for a while – comfortable and awesome.

“Clear and Present Danger,” written by fan favorite writers Chad and Dara Creasey, was an excellent mix of the sexy tension between Caskett as they find their ‘solid ground,’ a bit of a confusing (but interesting) case that kept us guessing, and even a bit of Castle’s nerdiness coming into play in quite an unexpected way at one point (how does the guy own so many pots and pans, is what I want to know, but it did make for a HILARIOUS scene with Martha interrupting the two lovebirds.) Castle and Beckett were adorable as they navigated through the case, while trying to reconnect back at home. Every interruption had me wanting to take away their phones, friends, and family members to give them a little space. Every scene was on point, and that’s the reason these two writers are beloved amongst the Castle fanbase. They get it.

The Case: An insurance claims adjuster turned pool hustler is murdered by a pool cue while hanging out at his apartment. Try as they may, the team can’t crack the case because everything leads them to an invisible suspect. Color me, and everyone else confused. Well, except Castle, because obviously the killer is the Invisible Man. Or the devil. Both come up at some point as suspects during the hour. Castle and Beckett really have their groove back on this case, at one point we even get to see them do their sexual tension filled banter where they discuss who the killer might be while inching closer, and closer, and then… the phone rings. Lanie (a frustrated Castle sighs.) 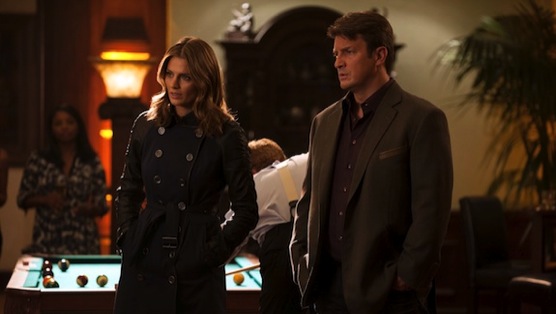 Our victim, Will Fairwick (played by Nick McCallum) worked the most upscale clubs in town, and was found with an unexplained $20,000 in his apartment following his murder.

The team knows their killer is invisible because surveillance footage shows the door opening and closing by itself on the top floor of his apartment building. Impossible for any wind to do, no matter what Beckett wants to tell herself, or anyone else. We find out that more people were attacked by this invisible being, and things just keep getting weirder. Castle and Beckett go back to the crime scene, and are attacked by this being, which leads Beckett to start wondering if this whole Invisible Man thing might be right, even going as far to lie to Gates about what they found (because, what did they find?) Fairwick’s phone records lead the team to his girlfriend, Donna Brooks, a university marine biology professor. Brooks was a former classmate of Fairwick at MIT, who tells Castle and Beckett that Fairwick had recently reconnected.

Just as everything seems to be completely stressful, Castle offers a way to get her mind off the case – a little reconnection back at the loft. Of course after the tension filled first half of the episode (filled with glances in each other’s direction, heart foam coffee’s, and innuendo’s), how could she say no? She doesn’t. Turns out, they missed each other quite a lot over the two months (Beckett more than Castle, as she says, he did have amnesia for those two months). Great scene, where we see how badly they want each other, but how loving they are as well, and I enjoyed the call back to the amnesia, which shows viewers that the storyline is really far from over. Glad they haven’t forgotten about it. I think the best part of this scene (besides seeing them finally back to themselves again) was when Castle put up a trap for the Invisible Man, who they thought might be in the apartment, made of floss and pots and pans, and Martha comes in to look for said floss, interrupting Caskett, and getting stuck at the same time. Bad timing, Martha, but definitely hilarious.

Eventually, Castle and Beckett find out Fairwick was a quantum engineering scientist at this government facility—one that specializes in the research and creation of an invisibility suit. See, there is an answer – kinda? It seemed a bit far fetched to me, but apparently the science in this episode was all real, according to a tweet from show creator Andrew Marlowe.

A lovers quarrel: All of the evidence eventually leads them back to Donna Brooks, who confesses to killing Fairwick because he betrayed her. He apparently only used her for research and then dismissed her completely. Ouch.

She ends up escaping, though, with the invisibility suit. This leads Castle and Beckett into a lab, where they once again seem to be having a little too much fun with their current situation, and end up using the fire extinguisher to find our invisible woman. Castle mentions that he missed their mind melds. So did we, Castle. So did we.

In the end, the killer is captured, and Castle and Beckett get their happy ending as well. No pun intended.

I loved this episode, and was so happy to see our duo back in action, and on their way to that solid ground they so badly need. When’s the wedding countdown?